The Star Wars universe is full of Force-sensitive creatures. Some of them are Jedis fighting for peace and justice. Others are Sith lords who want control and power. These Jedis and Sith lords wield different types and colors of lightsabers. Out of all these lightsabers, there is one unique and mysterious type. This lightsaber is neither used by Jedis nor Sith lords.

The temple guards are originally Jedis. According to the story, some Jedis are removed from Jedi ranks and assigned the duty of temple guards. Most of the time, these Jedis volunteer to become Jedi temple guards.

It is considered a holy duty among the Jedi Order. The temple guards dedicate themselves to the protection of temples. They do not participate in outer politics and stay committed as guardians for life.

The temple guards perform some other duties as well. They are mostly involved in the Jedi rituals when a Jedi Padawan becomes a Jedi Knight. These guards used their lightsabers against Ahsoka when she was tested for Jedi hood.

After the execution of Order 66, some of the Jedi temple guards abandoned the temples and sided with the Sith lord to survive. The famous Grand Inquisitor was once a Jedi temple guard. But most of them were committed, as seen in the Rebels series.

Temple guards are some of the best Jedis, and their lightsaber reflects their commitment. Let’s dive into the details of this unique lightsaber. 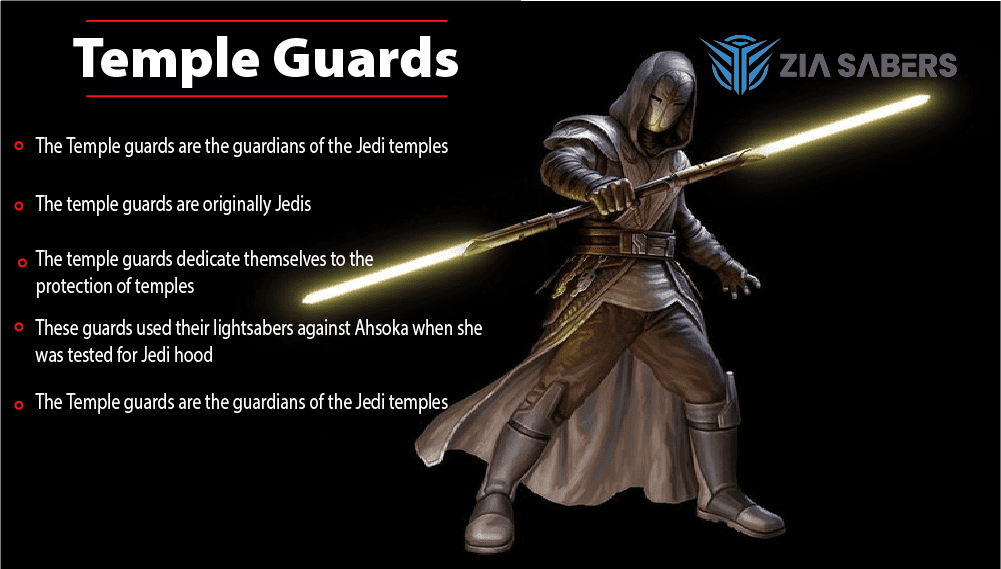 These lightsaber pikes hilts are made of special Phrikk material. This is one of the few materials that can withstand lightsaber strikes. The hilt has a cool and unique appearance with white and brown colors and some accents of black color in it.

The temple guard lightsabers appear in the “Force Unleashed.” game for the first time. They were supposed to be green at first but later changed to yellow color. Lightsaber pikes are the first of the few yellow lightsabers in Star Wars. 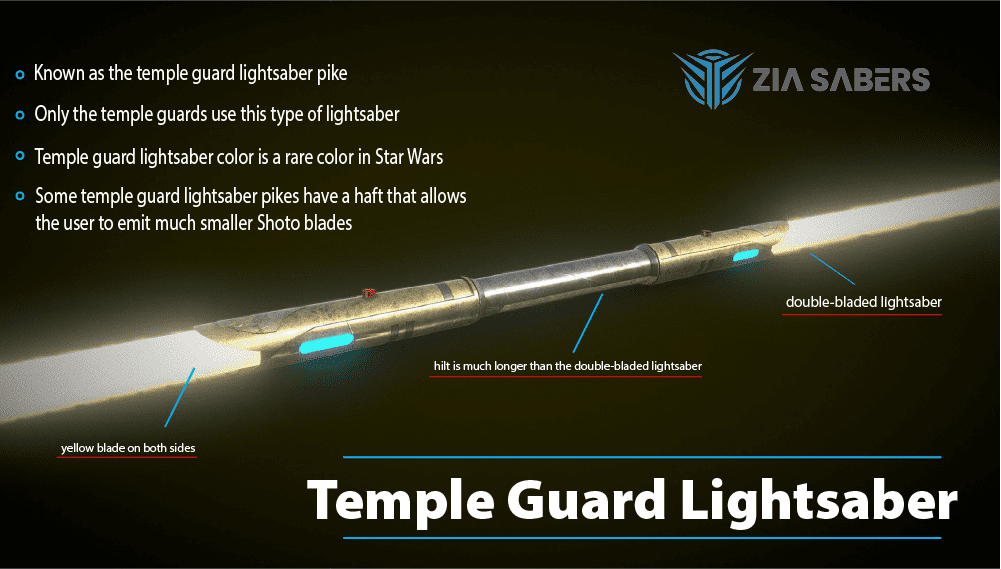 This variant does not have two blades. It is a single-blade lightsaber, but the blade looks like a long ax. The blade had an orange color which was very different from the Temple guard lightsaber color. The hilt of the Sith lightsaber pike is a long metal rod. How this hilt worked with a crystal is unknown. 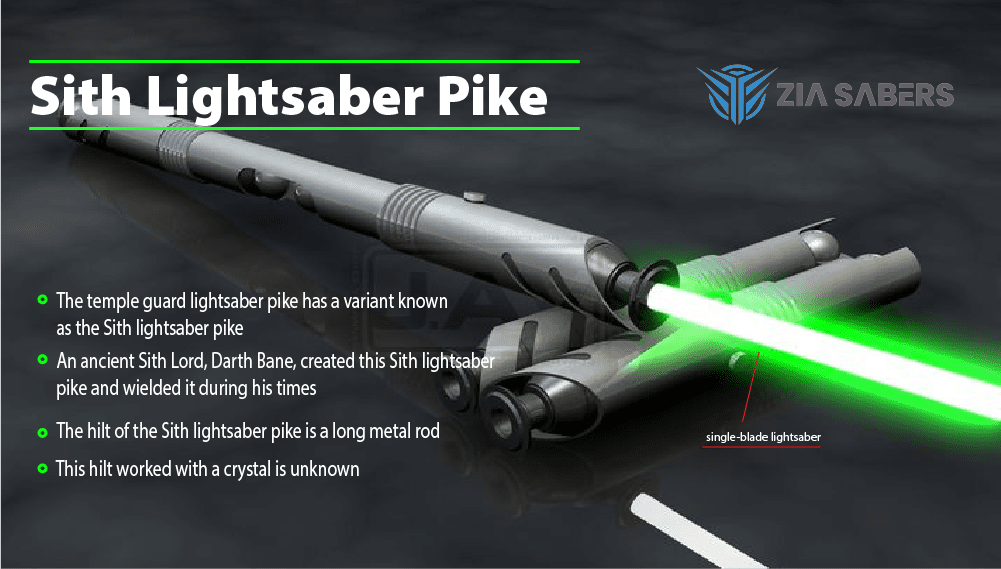 The first time Temple guard lightsabers appear in the 6th season of Clone Wars. Temple guards partook in a duel between Anakin Skywalker and Bariss Offer. Likewise, they also took a trial of Ahsoka Tano in the sixth season.

They appear yet again in the Rebels series. Caleb Dume saw some when he went into a Jedi temple in search of Master Yoda. He did not find Yoda, but he found many temple guards. These guards fought against him to test him. After the fight, they granted him the title of Jedi Knight. It appeared like these guards were not actually there. They could be the Force projections or visions set by the Temple guards during the Old Republic. 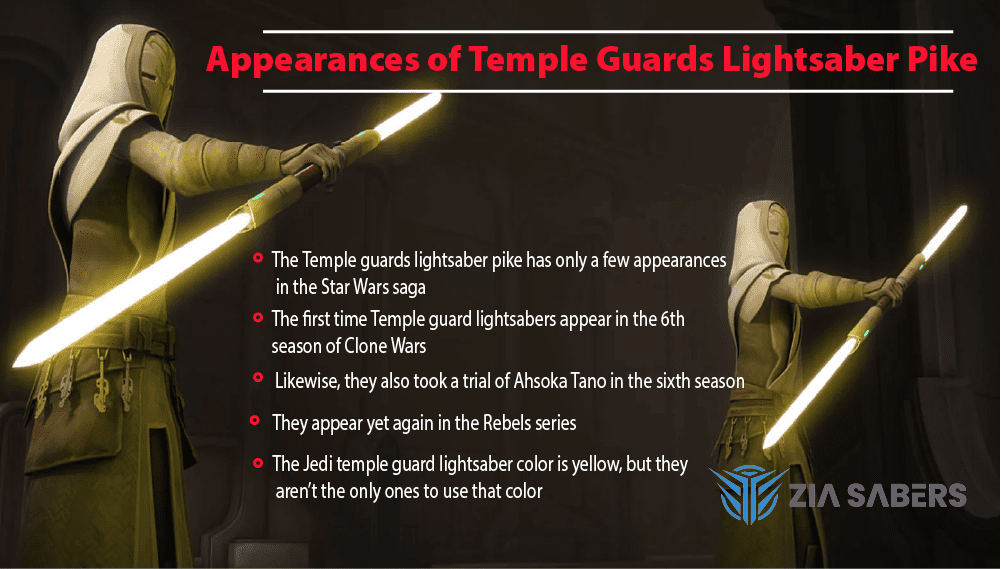 A Neopixel lightsaber is one that has multiple colors on its blades. It does not exist in the Star Wars universe, but you can certainly find it in our world. The LED strips inside the blade provide up to 12 preset colors.

If you are looking forward to buying a Jedi Temple Guard lightsaber Neopixel blade, you can check out the online stores. The Jedi temple guard lightsaber on Amazon is certainly available. But, the quality can be untrustworthy. 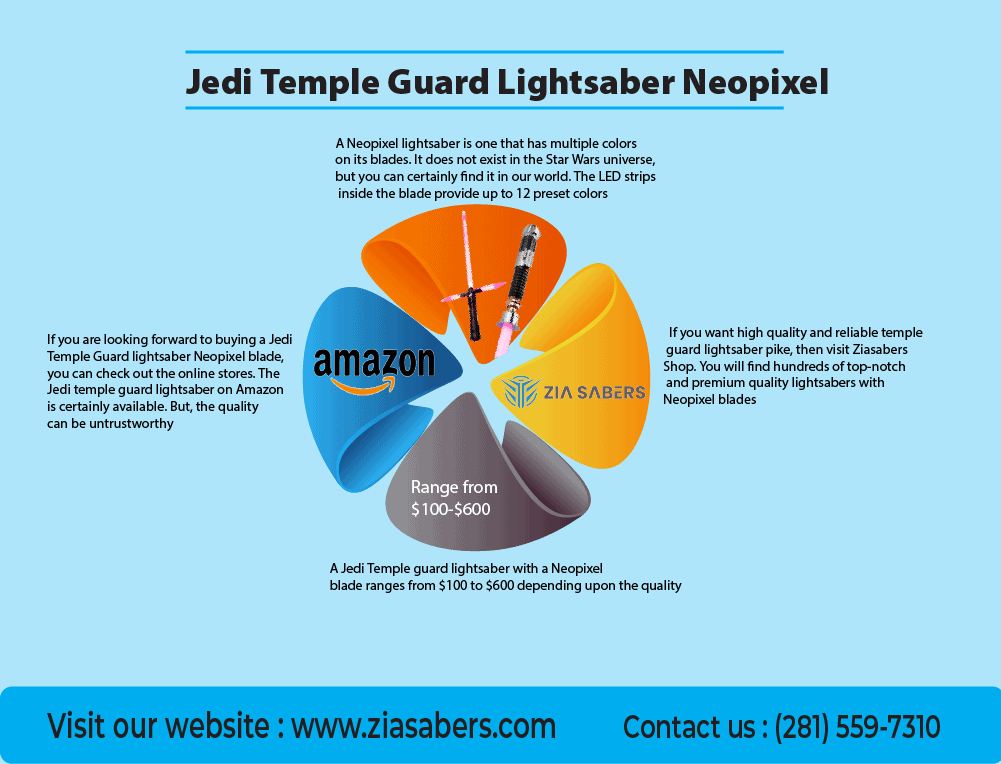