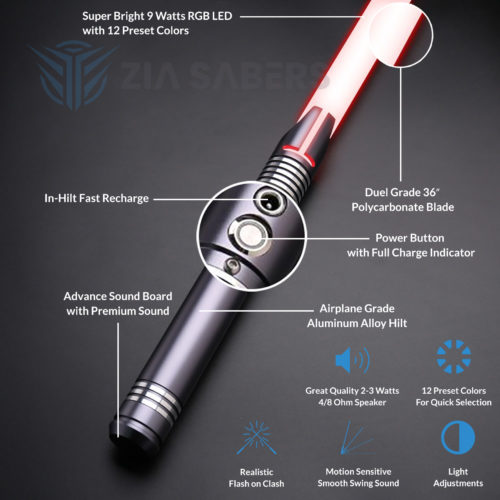 The color of a lightsaber blade reflects its owner's relationship with the Force. Kyber crystals, which power lightsabers, are colorless until they are found by a Jedi or Sith. To describe the feeling of finding the crystal that is meant for them, Jedi say that their chosen crystals "sing" to them. Why exactly some colors tend to be associated with different Force-users is not fully understood, as an orange lightsaber has been used by both Jedi and Sith.

At ZIA Sabers, all of our polycarbonate blades have infinite color selection capabilities. The orange blade color may represent the use of both light and dark side Force abilities, though some say that the orange blade represents a guru Jedi who has chosen a path of peace rather than violence.

A few people have wielded a lightsaber with orange blade. A group of Grey Jedi who used orange lightsabers called themselves the Fire Warriors. For the Fire Warriors, the orange blade represented a combination of the red color of the sith with the yellow Jedi color signifying dedication to eradicating evil. These warriors drew power from both the light and dark side of the Force to destroy evil without swearing allegiance to the Sith or the Jedi. Jedi Master Yaddle also wielded an orange lightsaber, though she rarely used it. While there is a lot of speculation as to why her blade was orange, she never specifically mentioned the reason why. The last orange lightsaber we know of would be the fiery bronze lightsaber wielded by Freedon Nadd, a dark lord of the Sith. One could argue that Nadd's lightsaber was so brilliant and fiery in color simply because of his immense power.

Orange lightsaber blades have been used by Jedi, Sith, and Grey Jedi. If your chosen color is an orange blade, it may simply mean that you stand out from more traditional Force-users.

If you want to do a cosplay as Freedon Nadd or Jedi Master Yaddle, an orange lightsaber would be a perfect choice for you. Otherwise, you may want to choose a different color if cosplaying as someone else.

All of our lightsabers are made with a durable polycarbonate material that makes them perfect for combat reenactments. They also flash and make sounds on collision, so you can truly relive the most epic battles.

All you need to do to choose the color that suits you best is to meditate with the Force and find your chosen path. Based on your knowledge and how to Force calls to you, a color will start to materialize in your mind's eye if your focus is true.